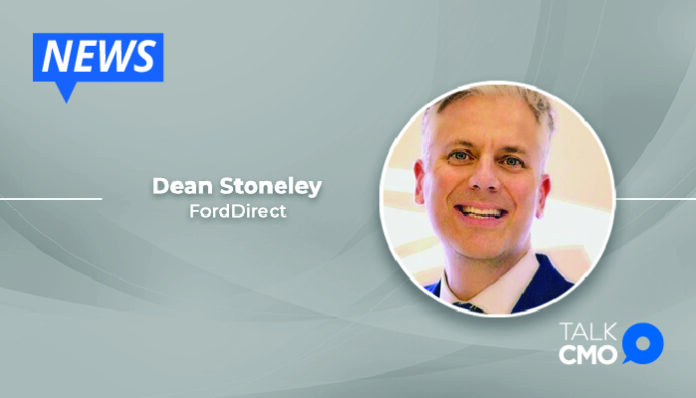 FordDirect, a joint venture between Ford Motor Company and its franchise Dealers, announced today that Dean Stoneley will become the company’s new CEO and a member of the FordDirect board of managers. He succeeds Matt VanDyke, who has resigned to pursue external interests.

In his new role, Stoneley will lead the team responsible for bringing together the worlds of digital, data, and technology to deliver best-in-class marketing and advertising solutions to Ford Dealers and Lincoln Retailers consistent with the customer-focused Ford+ plan for growth and value creation.

“We are excited to welcome Dean Stoneley to the FordDirect team,” said Mike Pallotta, president of Pallotta Ford Lincoln in Wooster, Ohio and chairman of the FordDirect board of managers. “His tremendous relationships within Ford and his marketing experience will enable a strong and smooth transition and continuation of FordDirect’s positive momentum as we help Ford Motor Company, Ford Dealers, and Lincoln Retailers provide great customer experiences and win at retail.”

After joining FordDirect in early 2021, VanDyke was instrumental in significant change and success at FordDirect. During his tenure, FordDirect earned “Top Workplace” recognition from the Detroit Free Press for the first time. The company scored all-time satisfaction survey highs from Dealers and Ford in 2021 following significant changes to the product portfolio, including evolving the former third-party lead delivery platform into an enhanced service. VanDyke oversaw the start of foundational work in project management and innovation and the launch of new inventory solutions to help dealerships through the unique challenges of the past two years.

Also Read: Ways to Optimize the Value of the MarTech Stack

“Matt VanDyke has done a terrific job at FordDirect,” Pallotta said. “His leadership skills, mentoring, and knowledge of the digital landscape have really been a big advantage for Dealers and FordDirect. He will be missed and we wish him all the best.”

An accomplished industry veteran, Stoneley most recently held the newly created role of general manager, North America Truck at Ford. In this role, he built a team with end-to-end responsibility for Ford’s successful pick-up truck portfolio. During his tenure, F-Series was the best-selling truck in America for the 45th consecutive year. Stoneley also launched the all-new Ford Maverick, the recipient of numerous awards, including the 2022 North America Truck of the Year.

“I want to thank Mike Pallotta and the board of managers for their support,” Stoneley said. “I could not be more excited to be taking on this role. Marketing has been a lifelong passion for me, and I have been inspired by the work at FordDirect as I have modernized marketing functions across a number of markets globally. This is a business performing at a high caliber with an incredible level of sophistication. I can’t wait to learn more as we strive for continued success while serving Ford Motor Company, Ford Dealers, and Lincoln Retailers. I look forward to the chance to meet the FordDirect team.”

Previously, Stoneley was president and CEO of the Ford Motor Company of Canada, where Ford is the No. 1 brand in the market. During his tenure, Stoneley worked closely with the Canadian government and Unifor to secure Oakville Assembly Complex as a BEV manufacturing site for the company.

Stoneley’s background with Ford has been predominantly in the marketing space, where he has held key marketing leadership roles in the U.S., Canada, Southern Africa, and Asia-Pacific markets. While based in China, Stoneley was vice president and director of marketing for a new joint venture with ChangAn Ford, responsible for marketing, sales, and service of Ford vehicles in China.

Stoneley is a past chairperson of the Canadian Automotive Partnership Council and member of the board of the Canadian Marketing Association. He holds a bachelor’s degree from Western University in London, Ont.

Will B2B evolve into the Business for Everyone (B2E) model?