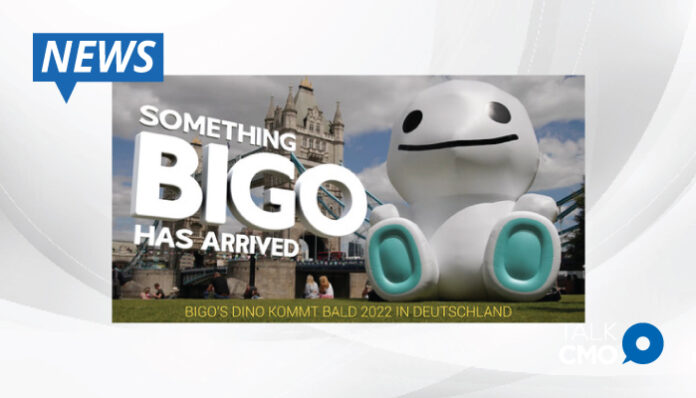 Bigo Live, one of the world’s fastest-growing live streaming platforms with over 400 million users in more than 150 countries, is proud to present the tour of its beloved mascot Dino in Europe. The tour kicks off at Freiheit 15, 12555 Berlin / Köpenick, Germany, with an extravaganza party on August 28 from 18:00-21:00 (CEST) that features a night of top broadcasters and performances, live DJ sets and music, as well as award ceremonies.

Similar to its recent tour in the UK, the giant dinosaur will also be seen in this iconic location as it is 5 metres high and 2.5 metres wide. Guests can share and broadcast their participation in the event with others. In addition, participants can earn rewards by participating in a number of games and quizzes.

Unlike pre-recorded videos, live streaming allows users to share their videos in real time and unedited. Livestreaming offers users the opportunity to become creators themselves and connect with the desired audience as well as with other creators and influencers in their respective fields. In recent years, more and more people have opted for livestreaming. Bigo Live has also contributed to this as one of the most important platforms. To celebrate this growth, the Dino Tour event was launched – it is intended to symbolize the connection between the digital and physical worlds.

The Giant Dino Project is a tribute to the open and all-encompassing culture of BIGO Live. We’ve seen remarkable growth on the platform this year as more and more German fans have discovered the benefits of livestreaming. That’s why we wanted to share our gratitude with the broadcasters and their communities and give something back to them with a campaign that highlights their true connection and talent outside the digital space.

The event also marks the launch of the first out-of-home campaign in Berlin, involving well-known broadcasters Crazyphil and Xlucie, among other influencers. The launch will take place throughout August 2022 in Berlin.

Momentum expands around the Vision 2045 campaign for cleaner business