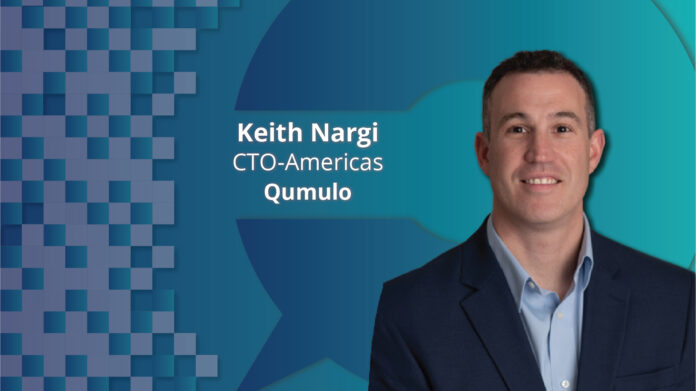 “Qumulo’s goal has always been to become a vendor-neutral, cloud-agnostic platform with a consistently great experience across any environment, whether it is on-premises, hybrid cloud, or multi-cloud,” says Keith Nargi, CTO-Americas, Qumulo, in a Hot Seat interview with TalkCMO.

TCMO Bureau: Can you explain why someone should buy your product Studio Q and not your competitor’s?

Keith Nargi: Today’s media and entertainment studios require high-quality, high-performing and highly scalable editing systems. Studio environments require at least 4k video sizes and high-quality audio, demanding upwards of 350MB of data storage space a minute. In addition to the high demands of these workloads, the shift to remote work has disrupted the way creators do their jobs. All this is to say, creating studio-quality video content has never been more of a challenge than it is now, which is why we created Studio Q.

Qumulo Studio Q is a solution that brings simplicity and scalability to creative studios. It enables teams to carry out their creative workflows in the cloud with Adobe Premiere Pro, built on AWS and Teradici for low-latency connection. With Studio Q, creative teams can meet deadlines faster and easily scale production so that they can spend less time architecting infrastructure and more time creating.

A major advantage of this solution is how simple it is for users to deploy. They don’t need to be a deep cloud expert or have worked with AWS before, and won’t need to involve your IT department. All users need to do is download the AWS Studio Q Quick start and deploy it directly from their AWS account. The quick start will set up the cluster and the editor workstations in less than an hour providing users the ability to get up and running faster with their Adobe workloads.

Keith Nargi: Qumulo’s price planning was designed to give customers ultimate flexibility, and all of our storage nodes and clusters are available on the AWS marketplace. The major advantage of Qumulo is that they can spin up and spin down storage resources as needed for projects, which allows users to have constant control over their costs. Customers pay for the storage they’re using but always have the option to scale as needed. Qumulo’s pricing for Studio Q is billed directly through AWS and its partners so customers can control the costs of this solution like they do any other workload they have running in AWS.

TCMO Bureau: The cloud has most of the attributes of Studio Q. What is the special strength it imparts on its users?

Keith Nargi: The cloud provides major advantages for businesses, and two of the greatest strengths it brings for Qumulo users are flexibility and control.

When users deploy a typical media studio, they don’t have infinite computing power nor infinite storage, and time is a constraint, based on what they have available to them in their data center.

However, once the workload is moved to the cloud, time becomes a variable as they can take control over how much computing power they need. For example, if users are working up against a tight deadline and need render done in two hours – they might need a thousand computer nodes to finish render. They can scale up the production workflow when they need more capacity, then scale back down when they no longer need that extra power. Time is no longer a constraint but a variable that customers can control as needed.

This is a major benefit of cloud computing and Studio Q.

What makes Studio Q so powerful is that it is a pre-packaged solution with Teradici and Adobe that can simply deploy using AWS CloudFormation Templates. Customers don’t have to piece the infrastructure together because it’s already been done as part of this offering, allowing studios to focus on creating content and not managing infrastructure.

TCMO Bureau: Are you riding on AWS only? What if someone wants to use Azure and deploy your solution, will it work?

Keith Nargi: Qumulo’s goal has always been to become a vendor-neutral, cloud-agnostic platform with a consistently great experience across any environment, whether it be on-premises, hybrid cloud or multi-cloud. The core architecture was designed specifically with flexibility in mind.

Qumulo lives in a multi-cloud world. It would be an anomaly for the customers to run in just one cloud, so Qumulo provides the agility to switch between multiple cloud providers, not just AWS. Qumulo will continue to build new solutions across all cloud service providers enabling customers to pick which cloud they want to deploy a specific workload in.

Keith Nargi joined Qumulo in January 2015 and is the CTO for the Americas. Keith brings 20 years of file system technology & infrastructure and cloud leadership experience to the role. Prior to Qumulo, Keith was the Director of Global Corporate Advisory Engineering at Isilon Systems.

Verse.io launches trustContact™ to ensure businesses get their calls and SMS delivered to customers