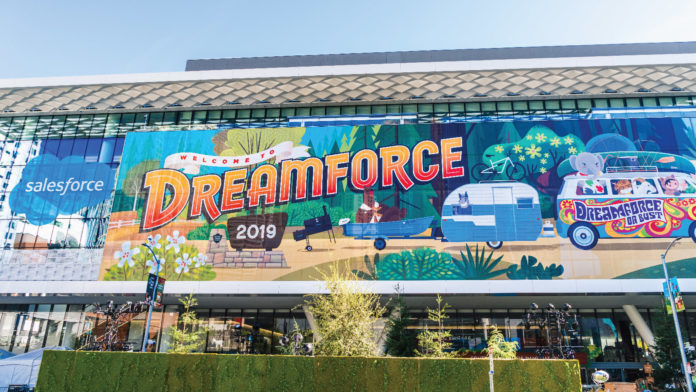 The Dreamforce 2019 as promised was an exciting event filled with path-breaking innovations, new product launches, and expanded strategic partnerships. The event delivered a holistic learning experience for industry players, customers, partners, employees, and even students.

19th to 22nd November marked Salesforce’s 17th Dreamforce event, bringing the entire Salesforce community together for four days of fun, innovation, learning, and giving back. This year’s Dreamforce featured the much-awaited launch of Einstein Voice and Customer 360 Truth. Many such exciting launches were accompanied by inspiring conversations on sustainability, a Fleetwood Mac concert, meditations led by the Plum Village monastics, and more. Yet, the most talked-about news throughout the event remained to be the expanded partnerships between Apple and Amazon.

During this event, Salesforce announced its target of doubling the annual revenue by 2024. After generating around $17 billion in revenue this fiscal year, Salesforce now expects to push it further to a goal of $34 billion and $35 billion in the next five years. The revenue will be driven by the plans of getting more customer data into its clouds, regardless of the origin of the data.  At Dreamforce 2019, the CRM giant clarified its intention of not just facilitating the creation of new jobs or new workflows, but also pulling actual business value into its orbit.

Salesforce also focused on pushing its Customer 360 as a platform to bring all of the clouds together. Salesforce’s “multi-cloud” strategy is expected to bring more data into the Salesforce orbit. But with the new Customer 360 Truth, it plans to pull in data sitting outside the Salesforce ecosystem as well. As an extension of its CRM platform, Customer 360 Truth promises businesses a “single source of truth” for all customer data. Customer 360 Truth leverages the Cloud Information Model(CIM) to standardizes data interoperability across cloud applications. Salesforce has formed this CIM in partnership with Amazon Web Services, Genesys, and the Linux Foundation’s Joint Development Foundation.

Salesforce’s strategic partnership with Apple fueled speculations regarding the sales tech giant’s strides on mobile learning and seamless mobile CRM access. The event marked the launch of Trailhead GO, which is the first app of its kind for iOS and iPadOS. The app will simplify the process of upskilling while on the move providing access to 700 modules on demand. Although a Salesforce mobile app already existed, the revamped version is a visual treat, boosting increased functionality courtesy of Salesforce Einstein. The new version of the app will provide access to advanced analytics on their business data, as well as offer exciting features such as Siri shortcuts, Voice Assistant, and Face ID.

Aided by Salesforce’s acquisitions of business data giant Tableau, and integration specialist MuleSoft, the era of Einstein Voice has set in. Einstein Voice Assistant, an innovation for hands-free CRM operations was launched at the event. Along with Customer 360 and Einstein Voice Assistant, Salesforce also introduced Salesforce Evergreen technology for serverless functions. The Salesforce Evergreen helps deliver services such as event processing in languages like Apex, Java, Node, HTTP apps, and APIs, but in a serverless environment. It also provides easy accessibility to managed data stores such as Redis, Apache Kafa, and Postgres, to enhance the existing Salesforce DATA APIs which are available through Salesforce CDP and MuleSoft integrations.

The CRM brand reinforced its popularity and market dominance in the event, as it announced that the car manufacturer Lamborghini utilizes its Blockchain solution. Dreamforce 2019 had over 171,000 registered attendees and above 2,700 sessions and workshops, with speakers like Gucci CEO Marco Bizzari, the CEO and co-founder of Ellevest, Sallie Krawcheck, and chef and activist Dominique Crenn.

The event’s success was celebrated by a candid conversation with Barack Obama, which remained one of the biggest highlights.

Salesforce has assured zero distractions from its current roadmap to doubling the revenue in the next five years. And the success of Dreamforce 2019 evidently conveyed the message clear and strong.

Also read: Cybersecurity Must Be a Primary Concern for Digital Marketers